Sportives have lost a little of their allure for me but the 102 mile Galloway Recycle event certainly helped restore some of my enthusiasm. 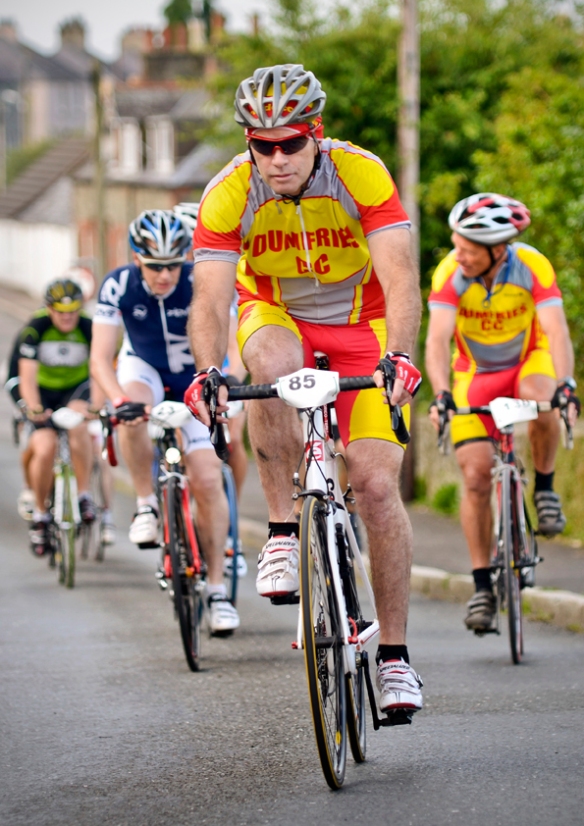 Firstly I liked the title of this sportive – not so much the play on words but the fact that it reflected a clear focus, the use of re-cylced bikes for youngsters through the KilliCanCycle charity. We cyclists sometimes just think about the route for 100 miles or the weather but many sportives do a lot of good work for charities and the ambition of the Galloway Recycle organisers deserves credit. It was also a plus for the organisers with their speedy feedback on timings for riders. The use of transponders was pretty cool.

Living in Dumfries I knew the various parts of the route but had never ridden it as a complete route. Thinking about it in advance I calculated the lumpy ascent towards Gatehouse from Creetown would be a low point for the morale – I wasn’t disappointed. However I was looking forward to the Clatteringshaws section of the route…more of this later.

I intended taking my Tommasini for a bit class and comfort. I’d told some of the boys I’d be riding with a cravat and smoking a pipe. Unfortunately I’d spent the week trying to index my upper class Italian machine only to realise too late that it needed some new cabling. I took the carbon Felt instead which was untested for comfort over 100 miles. Either I’d be fine or spend half the ride with a fossilised back-side and numbed fingers. 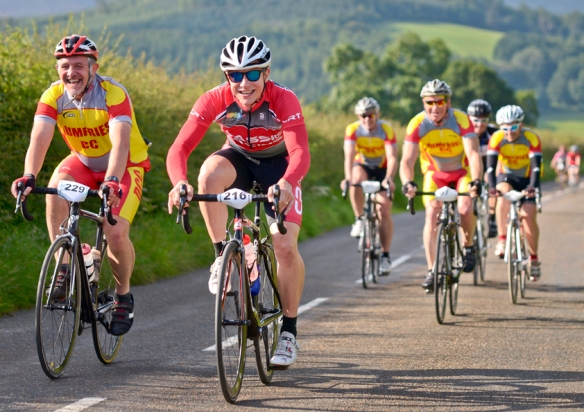 One thing I really look forward to on Audaxes and Sportives is seeing the vast array of bikes on show. I would have to say that this has become less exciting in recent years. At the start point in Kirkcudbright there was a vast amount of colourful machines but I was struck by how similar bikes are now looking (my Felt included). Has the road bike market narrowed so much that we ride with much the same spec…the same finishing touches? What about some cool forks? Some striking lugs? To people out there who are new to cycling – don’t go looking for a Sportive bike because they don’t really exist! A good bike will do everything you want of it including sportives.

On the road I spotted one bike of note, an old de rosa, sparkling blue in the summer heat. The rider had a huge hole in his shorts and a pair of trainers on with SPDs. He was a strong cyclist without a doubt but please respect that de rosa with decent kit!

Sportives mean riding with different cyclists. This isn’t too daunting as road cyclists are of much the same mind and the conversation follows the usual topics; bikes, route, weather. On the Recycle Sportive I did hear two new phrases unknown to me. One cyclist in our group referring to the run along the Queen’s Way said ‘That was a chew-on.’ I nodded in agreement but what was I agreeing to? I don’t have a clue. Was it a re-working of chewing the handlebars? I heard another say  ‘I just about lost ma tattie…’ Eh? Come again?

One downside of riding with different cyclists is that in larger groups things can get a little nervy. A couple of our boys had a little spill on the Gelston section of the route – nothing serious – but no doubt it was the slightly different conditions of riding in an unfamiliar group which had an impact. I saw the same thing happen back in 2006 during the Cumberland Challenge and again this was early. Nerves like these are something we might share with pro riders in Big Tours where there are a lot of crashes in the opening days. I think it’s a good idea to take things a little bit easier for the first half of the route and get myself acclimatised. 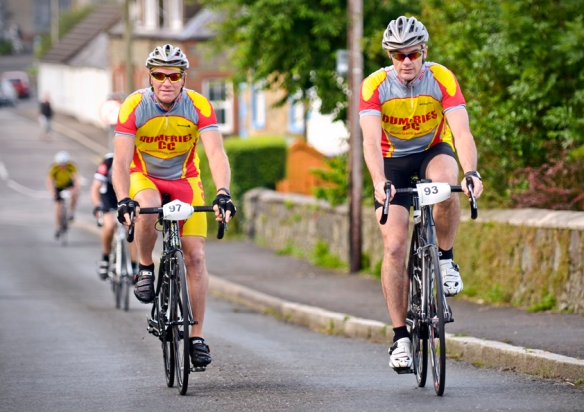 What about the route itself? Well whoever planned this route had one eye on its challenges and the other on the natural beauty of the area – a stimulating combination. Also the weather was incredible – sunny and warm for the whole day (freakishly unusual for this summer). Everything looked glorious in the sunshine. Yet nothing looked more glorious nor more spectacular than the fast ride from Clatteringshaws Loch along The Queen’s Way to Creetown. I think at one point I forgot all about the road as I craned my neck left and right in pure wonderment. All those dismal winter runs, the turbo sessions in my freezing garage, the hill repeats…all of it was worth it to ride my bike through such majesty.

Add to this the rolling climb over to Laurieston and the moment you rejoin the coast road for Kirkcudbright and you’ve got a feast for the eyes and great work-out for the legs.

Sportives are collective events but really they are also individual challenges. No matter the route my hard section is always between mile 55 and mile 75. It is the time of doom for me. My morale is usually in my cycling shoes till I get to mile 76 and then the legs get a new shot of energy. By a cruel twist of fate my time of doom came just as we turned into a nagging headwind at Creetown and started to push our way up towards the feed station near Gatehouse.

Luckily I was in good company with Gordon and John from Dumfries CC and another strong rider. Following the road biker’s code we shared the work and got to the feed station. I noticed on this sportive how supportive the volunteers were and how well stocked the tables were with cyclist essentials: water, bananas, flapjacks and some words of friendly encouragement. At Gatehouse the marshals assured us we had several miles of downhill which definitely made my roll go down easier. They also supplied tunnocks tea cakes which I would’ve devoured had it not been for the possibility of them melting in my pockets. A tea cake at a feed station? I would never have guessed on that option.

We climbed up over Laurieston Moor in the baking heat. The abundant scenery made the lactic seem secondary. At this stage we were joined by another group and the nervy feel came to me on the descent and I lost contact before Castle Douglas. Getting isolated on a sportive is not too clever but until I start working on my descending it’s always going to happen.

However I knew I was fit and motivated enough to ride the last 25 miles at a decent tempo. I kept an eye on my average speed as a way of maintaining my momentum and rode steadily towards the tranquil seas at Auchencairn. I was glad the organisers had placed a feed station 10-12 miles before the end. I was desperate for some hydration and I was beginning to experience that hollow signal in my stomach (the signal = the knock is coming). One of the volunteers asked me if I needed anything. I summoned all my eloquence and shouted ‘WATER! FLAPJACK!’ That man saved me from slipping into deficit. 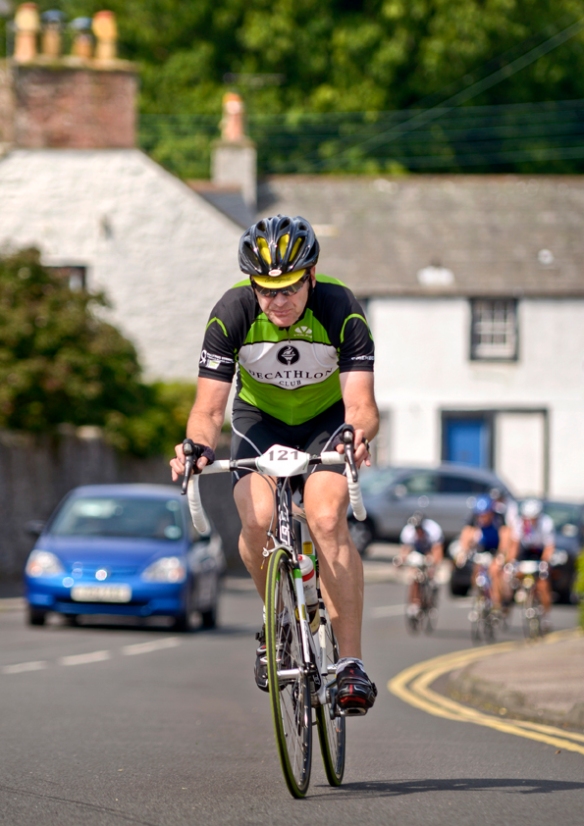 My mouth crammed with flapjack, I hit the climb which begins in Auchencairn and climbs up towards Dundrennan. A photographer had positioned himself on one of the bends. Damn! 90 miles of biking, try sucking in your stomach with a mouth full of biscuit so you don’t look hellish in a photo! By good fortune we caught some tail wind which eased the struggle for the last 15k.

Near Dundrennan I saw one of my original group from Creetown up ahead. Just as I had nearly bridged the gap he caught a suped-up tractor and drafted it away from me. Chapeau to a rider who can jump onto a tractor draft after 95 miles.

The ride into the finish was uplifting. Tired legs and stiff upper body immediately gave way to the warmth of the crowd and the MC welcoming you back to Kirkcudbright. And of course your cycling buddies who finished before you give you a wave of encouragement. Long after the stiff legs and the gripping of the bars I’ll remember the Recycle sportive for its great organisation, friendly atmosphere and immense, endless scenery.

Cycling photographs provided by Novantae Photography ( I recommend this young man’s photography site for tremendous images of cycling across a range of events and some eye watering scenery).

2 thoughts on “Cycling and Recycling”